Dromard Parish ("Lower Killoe") was once part of the larger medieval parish of Killoe and Moyne is part of the parish. It takes its name from an old Mass house built in the 1750s on Dromard. The parish of Dromard borders three counties and three provinces being located in Co. Longford it also borders parts of Leitrim in Connaught and Cavan in Ulster. 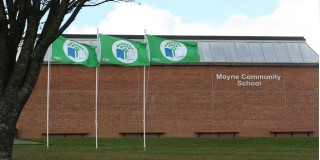 Moyne Community School is a multi-denominational co-educational school with a comprehensive range of subjects and first-class modern facilities. It is built on a large site consisting of slightly over 30 acres on Firmullagh Hill in the parish of Dromard, Co.Longford. Moyne Community school was established in 1973 through the amalgamation of the old "Latin School" Moyne and "Ballinamuck Vocational School". The building was opened to pupils on 9th September 1974. Bishop Cathal Daly in his foreword to the book "The Latin School" described Moyne Community School as the "legitimate inheritor of the Latin School". Its staff and students have inherited the name and honour of "Moyne men" and "Moyne women". They are entrusted with the perpetuation of the traditional spirit of the Latin School. The first principal of the community school was Fr Philip Magee a native of Dromard. Fr Phil died suddenly on 7th January 1975. He was succeeded by another Dromard man Mr James Mac Nerney who was principal from 1975 until his retirement in 1997. Mr Liam Faughnan a former teacher in both the Latin School and Moyne Community School took over as principal in 1997. Moyne also provides for the recreational and educational needs of up to 500 adults each year through the Adult and Community education Programme.

Dromard has been one of the most successful GAA teams in the County since the mid 90's. Backboned by a strong community spirit Dromard have been county champions in Longford in 1999, 2005 and 2007. The club also boasts fantastic playing and recreational facilities and is one of the best grounds either urban or rural in the county.

The parish of Dromard was originally part of the medieval parish of Kiloe. Kiloe incorporated Drumlish/Ballinamuck and the modern Killoe parish. There were two holy wells in the parish, both dedicated to St. Patrick who rumour has it, passed through this area on his way to destroy the great pagan idol Crom Cruach near Ballymagover, Co.Letrim. Tubberpatrick is not only one of these wells but is the site of a medieval Church and graveyard, which is still in use. Nearby is a mass rock and the site of the Synod of Clonelly in 1660 where a representative from every diocese in the ecclesiastical province of Armagh met in conclave and in seclusion. Education in the classics has played an important role in the record numbers of priests who have gone from here to missionaries throughout the world. Hedge schools have been part and parcel of this wonderful tradition. The known sites of these schools and the names of the masters are well known and have passed down from one generation of a family to another.

The church or mass-house on Dromard hill, which was probably thatched, gave way to a new church at Moyne in 1818. The stones from the old church were said to have then been used in the building of the Latin school in 1897. The history of the Moyne Latin school is of great importance not only for the history of the Diocese of Ardagh and Clonmacnoise, but also for the history of the Irish church at home and abroad. While it was lacking in equipment and facilities, it was rich in the tradition of learning. The school kept no systematic records before the 1930’s and the earliest available roll-book dates back only as far as 1932. It is not possible to give a definite date for the beginning of the school as it had it’s origin in the Penal Times when education for Catholics was prohibited and records were not kept. Today, The Moyne Community School exists as the inheritor of the Latin school.

In the nineteenth century, the area was a thriving and much larger village than today. It had two public houses and was home to many artisans. In 1838, work began on the building of a new National school. This school was first located just outside the chapel yard in the garden of an old galvanized house. It was expected to accommodate 90 females and 100 male pupils. This school was closed and struck off the list on 22nd December 1840. In the year 1893, two national schools, both male and female were established in Dromard. Both schools existed in Dromard until the year 1942 when the schools were amalgamated.

Until the year 1865, the church at Moyne, which had been the parish church since 1818, was known as St. Mary’s. When the church was rededicated in 1990 by Bishop Colm O’ Reilly, the commemorative booklet calls it St. Francis Xavier’s, a name by which it was known during Canon Briody’s term as P.P. and probably earlier. During the 1800’s virtually every house in Moyne and surrounding areas were self-sufficient as regards food for the family, thus development in Agriculture has always been continuous. In 1905, Lonsadales formed a new company named Western Creameries Ltd. At this time, I.A.O.S. held meetings at Moyne and Legga with a view to establishing the Co-Operative movement in the parish. The Dromard/Moyne Co-Operative society opened its doors for business in the spring of 1907 and ceased operation in 1932. Also, in the year 1923, The Corn Threshing Co-Operative was established. It was set up primarily for the purpose of getting a £5 grant then available to Co-Ops for the purchase of a threshing machine. The machine was purchased and operated successfully until 1946.

Things To See & Do in Dromard.

As the Ice Age passed, the depressions, which were hollowed out, filled with water and were colonised by sphagnum’s, large sponge-like mosses with water retaining properties. These mosses decomposed and formed peat at the rate of approximately 1 inch every 30 years. Peat is highly acidic, with water content of up to 90%. Oxygen is absent but carbon dioxide is present at high pressure. Bogs have heathers as well as sphagnums. They are also associated with sedges, grasses, insectivorous, sundews, pitcher plants, many orchids and desmids or single-cell green algae. nnThe main bogs in Dromard Parish are Edenmore, Cammagh, Garvary and Firmullagh, with smaller areas such as in Dromard, Clonelly, Ballduffy and Crott.

Originated as a hedge school, became a permanent building in 1897, remained open until 1973 when it was closed and replaced by a state of the art community school. During its 100 years in education, many famous scholars went through its doors. Out of this small school over 700 pupils went on to become priests, some bishops - a record that Dromard can be proud of. The present community centre started life in September 1897 as a two-roomed male secondary school. Its first principal and only teacher was Fr Philip Duffy. Here young men who wished to go join the priesthood were taught Latin and Greek, hence it was known as the Latin School. There were 33 young students in its first year but the school expanded over the years and the number of teachers increased most of who were clergy. In 1967 it became a mixed school and later in the summer of 1974 it ceased functioning as a school. All staff and pupils moved to the Community School half a mile up the road. The Latin School lay idle until 1983 when a local committee suggested that it be used as a community centre. With the aid of a FÁS scheme it was converted into the present community centre. It was opened in September 1984 and was renamed the Latin School Community Centre.

‘The Haggard’ in Ballyduffy Moyne is the Arts, Culture and Heritage Centre for the three province area and as such hosts a variety of events such as traditional music sessions, ceili dancing, plays and drama groups, as well as small festivals and events. ‘The Haggard’ is also the site of the annual ‘Mow Pat Murphys Meadow’ event which sees the men of the parish and further afield compete, as well as demonstrate, in the art of traditional scything of the local land.

There is a strong tradition that Dromard was one of the parishes visited by St. Patrick. Certainly the ancient holy well of Tobar Phadraig in the townland of Cornakelly has been venerated for centuries. Beside the well is an ancient cemetery of the same name, and it is likely that a primitive church also existed here. Every year on St Patrick’s Day many people visit the well and cemetery to do the Patricians Stations.

Tubberpatrick Graveyard: Said to be visited by St. Patrick in 435, where he blessed it as well. The oldest headstone carries the inscription JACOBUS FARRELL 1671. Around the parameter wall are stations of the cross, which were donated by Fr. Lawrence Cosgrove, St Pauls, Minnesota, USA - a native of Dromard. He also donated a bell which was donated in 1910, but only installed in 1993. The best-known monument in the cemetery was erected over the grave of General George Blake, who was executed after the Battle of Ballinamuck in 1798.

At Drumury, The counties of Longford, Leitrim and Cavan ,the provinces of Leinster, Connaught and Ulster, the parishes of Dromard, Carrigallen and Killeshandra as well as the dioceses of Ardagh, Clonmacnoise and Kilmore meet.

Like so many places in County Longford Dromard is blessed with an abundance of lakes and rivers. All well stocked with fish. If properly planned the natural beauty of the Dromard countryside together with the unpolluted waters should be Dromards best hope of a rosy future in tourism.